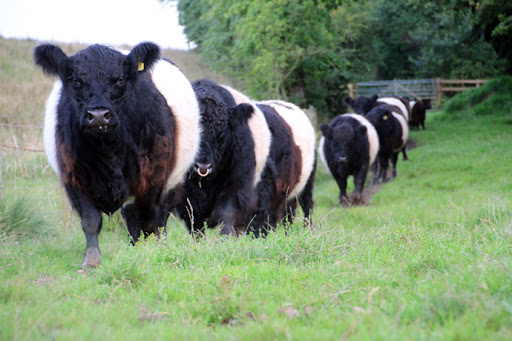 Although I'm an avid animal lover and support various animal rescue organisations (check out the Farm Sanctuary for some inspiration), I must admit that I've never been one to get excited over 'cute cows'.

But lately... I introduce you to the Beltie!

There's a small herd I pass regularly on the way to our property and the first couple of times I spotted them I thought it was some kind of special coat on a cow or two - until I realised that it's the distinctive coat of the breed.

Marked with a wide white belt of fur that goes around the belly, the Beltie (full name Belted Galloway) is a hardy breed that originated in South-West Scotland but has adapted well to life here in Australia.

Known for their longevity, they can live up to 17 years and were introduced to Australia in the early 1970s after establishing well 40 years earlier in Aotearoa (New Zealand).

Having a favourite cow breed strikes me as a pretty 'country' thing to do, but then I'm reminded that as I'll never actually be eating one I've still got a firm city streak.